Jane Winchmore had been widowed early – she could scarcely be thirty. Her best feature was her hair, which was thick silky gold, cut short, but she had the kind of features that went well with it: high Slavonic cheek-bones, a generous mouth. When she smiled, he saw that she had excellent teeth. She did not smile much, though. She gave the impression of listening to another conversation, watching another scene.

Her sister, sitting between Deeping and Hamilton, was altogether different, both in appearance and manner. She was slighter, very dark, reminding him of pictures of Princess Margaret. She had quite striking blue eyes, which she used to effect. She was a good deal younger than her sister, much the youngest present, and she chattered continually. Deeping and Hamilton competed amiably for her attention. She showed every sign of enjoying this, but Douglas noticed that once or twice she glanced covertly in his direction. A girl, he decided, who would be reluctant to accept that one could have too much of a good thing. 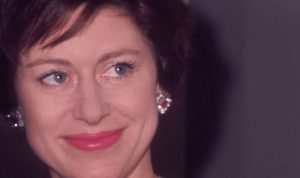 The final member of the party was Selby Grainger, the surgeon. He sat at Mandy Hamilton’s right hand. He seemed slight in comparison with his statuesque wife, but was fractionally taller than she was. He had a lean, mobile, somewhat delicate face. He was about Deeping’s age, but his manner was younger, volatile. He used his hands when he talked; they were finer, more delicate, than one would have expected a surgeon’s hands to be. But a plastic surgeon, Douglas remembered: not the same need for brute strength, presumably. He was intelligent, extrovert, a man with charm, who knew how to use it.