Message for our times?

On Wednesday (7th June), the New Yorker published a piece by David Cantwell entitled ‘An Early Dystopian Trilogy About Resistance—and What Comes After’ which discusses the work of John Christopher/Sam Youd, with particular reference to the Tripods trilogy. 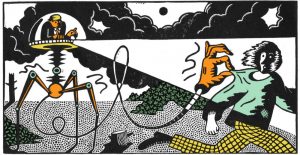 As David points out:

Rereading the book today, though, what’s most striking is its ultimate lesson. At the end of the series, after our young heroes have defeated the Tripod rulers, Will notices troubling political developments: renewed tribalism, authoritarianism, and nationalism among some members of the resistance. Since the Presidential election last November, many people have drawn on dystopian fiction—“The Hunger Games,” in particular—to explain our predicament. The implication sometimes seems to be that we can restore democracy by rising up to defeat our newly elected leader, Katniss Everdeen-style. The Tripods Trilogy makes the case that sustaining democracy is not so simple.

The need to sustain the struggle, even after apparent victory, is the note on which the trilogy concludes. “Are you ready for a new fight?” Will is asked by one of his friends. “A longer, less exciting one, with no great triumphs at the end?” Will agrees to stay connected with his friends and to fight, now, toward the never-ending goals of democracy and peace.