‘Presley?’ I said. ‘I think I’ve been through it. Near Liverpool?’

He nodded. ‘You might have done. The main Manchester road runs through it. We lived on that road until I was twelve – over a butcher’s shop. I used to spend hours in the window corner, watching the traffic. There used to be a lot of steam-trucks up and down between Liverpool and Manchester. They used to fascinate me. I don’t think there are any now, are there?’ 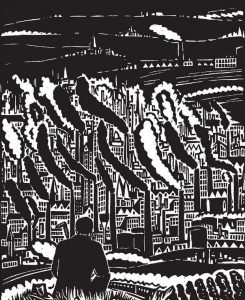 I said gravely: ‘I haven’t seen any.’

He began to unpack his bag; I cleared a couple of drawers in my wardrobe for him to use. He didn’t have much – a couple of pairs of pyjamas, half a dozen shirts, assorted underwear, a pair of shoes, and the usual odds and ends. There were a few books on top. He put them down on the divan while he put his clothes away and I was able to read some of the titles. The Holy Bible, the Confucian Analects, the Bhagavad-gita and the Upanishads, and Sale’s translation of the Koran. Oh my America, I thought, my new-found-land! How far, how faint now, the hissing rattle of the steam-trucks puffing between Liverpool and Manchester, passing how many butchers’ shops and how many youthful eyes watching at the first floor window. One more importunate, weary of the rough breath of living, the vital stink of humanity. But why had he come back? What was there for him here?

I suggested: ‘I suppose you have some plans?’

He looked up, smiling his simple, mournful, transatlantic smile.

‘Nothing, I guess, beyond getting to Presley.’