With only a child’s strength

Sight … Another stage required, the finding of the small muscles that would open the eyes, and then the directing. A strangeness here. Question and answer again. A heaviness, unknown before. Then, touch? Something that rested there, smooth – metal? The other muscles: arm, wrist, fingers. The hand moved slowly, lifted, plucked the coins first from one eye, then the other. Now the eyelids could open. Tears flowed from their ducts, the eyes blinked again and again. Sight came slowly, a blur of light, resolving itself, as fingers dragged the sheet back, into the shape of the lamp hanging from the ceiling. 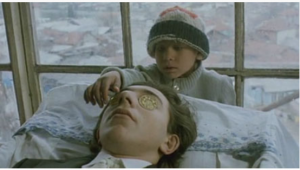 A pause. Immobility, a brief exhaustion. The Possessed was shocked still, from time to time essaying a hopeless resistance. There could be no resistance, the Possessor’s calm thought said. But the Possessor was patient. A long time of partnership lay ahead. The little flutterings of fear and defiance would fade into the glow of union.

Movements, the next time, were more purposeful. The synaptic paths were known and charted, muscle and sinew took their orders more easily, acted more deftly. The body pushed up, bracing against its elbows. It rose awkwardly, stepped from the coffin to the table, from table to chair, and so stood, upright, on the stone flags of the floor.

Those who had known the child would have thought him unchanged; and physically there was no change. Except in metabolism. For the Possessor’s memories were of a colder, heavier world than this. Heart and lungs worked more slowly, body temperature stabilised at a little over seventy degrees. This was a blessing the Possessor brought: the creature would live longer now, much longer, and in better health. The Possessor thought of this, with serene benevolence. Already it had become fond of its collaborator, its dwelling place, its slave.

The Possessor willed muscles to act, and they acted. Control was complete. But the movements would always be sluggish, judged by human standards, because of the Possessor and the Possessor’s heritage. The new entity that had been Andy Deeping walked with an unchildlike deliberation across the room, put out a hand, turned the handle and opened the door. It walked through to the passage and stood, for a moment, considering.

Survival meant propagation, assimilation, but from now on it could not be swift, annihilating, sure. Possession, for the future, would have to be achieved through that which was already Possessed and could not be done quickly. It was unfortunate, the Possessor thought, that the first should have been a child, with only a child’s strength. Force was out of the question; there would have to be guile. The mother … But the mother was not alone, and the others, inevitably, were the enemy. Until, in time, they too submitted.