A Wrinkle in the Skin

One night, the island of Guernsey convulsed. As shock followed shock, the landscape tilted violently in defiance of gravity. When dawn came and the quakes had stilled to tremblings, Matthew Cotter gazed out in disbelief at the pile of rubble that had been his home. The greenhouses which had provided his livelihood were a lake of shattered glass, the tomato plants a crush of drowned vegetation spotted and splodged with red.

Wandering in a daze of bewilderment through the devastation, he came to the coast, looked out towards the sea …

There was no sea: simply a sunken alien land, now drying in the early summer sun.

Gradually, a handful of isolated survivors drifted together. But where were the rescue missions from the mainland? How far did the destruction actually extend?

For Matthew, whose beloved daughter Jane had recently moved to England, finding the answer was all he had left to live for. 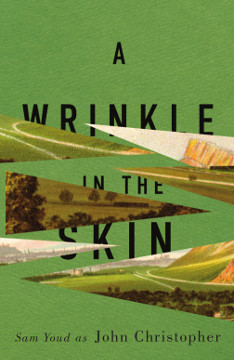