The sixties … a foreign country: they did things differently then. Or did they?

An Englishman’s home, supposedly, is his castle, and property developer Rod Gawfrey was incensed when a gang of hooligans gatecrashed his son’s party, infiltrating the luxury residence that was also home to his wife’s parents and her sister Jane.

He had no inkling then of the mayhem that was on its way, as the nation’s youth rose up in revolt, social order gave way to anarchy, and he and his family were reduced to penury.

Jane hadn’t seen it coming either, despite her professional and more personal connection to Professor Walter Staunton, the opportunist and lascivious academic bent on fomenting the revolution.

A pendulum, though, once set in motion, must inevitably swing back. And who would have guessed that Martin, Jane’s timid, God-fearing brother, would have a key role to play in the vicious wave of righteous retribution that would next sweep the land?

The SYLE Press – extracts from Pendulum
Cover by David Drummond 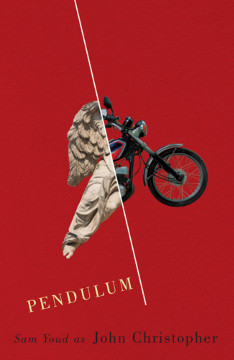