In 1949, Sam Youd – who would later go on, as John Christopher, to write The Death of Grass and The Tripods – published his first novel. As he later said:

I knew first novels tended to be autobiographical and was determined to avoid that. So my main character was a woman, from a social milieu I only knew from books, and … [with] a story that progressed from grave to girlhood.

When Rosemary Hallam dies, what she longs for is the peace of non-existence. Instead, her disembodied spirit must travel back and back, through two world wars and the Depression to her Edwardian childhood, reliving her life through the eyes of her husbands, her sons and others less immune than she to the power of emotion. And the joys and the tragedies which had never quite touched her at the time now pose a real threat to the emotional aloofness she has always been strangely desperate to preserve.

‘You remind me greatly of a swan, dear Mrs Hallam,’ her elderly final suitor had declared, ‘… effortlessly graceful, and riding serenely over the troubling waves of the world as though they never existed.’

The SYLE Press – extracts from The Winter Swan 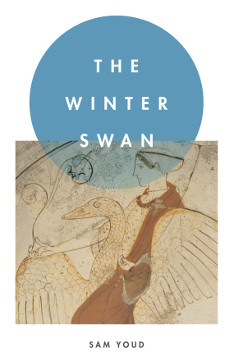