A dedicated man, Selby Grainger thought, would be starting to worry now about the possibility of delay in getting back to work. He stretched back in the chair, and gave a small grunt of satisfaction. Dedication, in this particular field, had a slightly comic sound – except, of course, in war-time. The day a week he gave to the Children’s Hospital was more than balanced by the four days at the Clinic, not least financially. He put his mind lazily to the recollection of his list. Mrs Enderby – breasts. Nathan, Levi and Moncrieff – noses. Juliet Minchin – naevus. 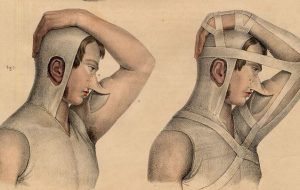 The last was the only one which was likely to give him any personal satisfaction. Breasts, however proud the patient might be of the improvement, did not usually go on public show, and he rarely felt entirely happy about noses. One would need to re-model the whole face for a really good result; as it was, the re-shaped nose generally seemed wrong to him, however pleased the patient was. But a naevus was something else. Taking that ugly blotch off the girl’s face was going to be one of the satisfying jobs.