‘All animals are equal’

Silence was broken as they scrambled out of the boat, for the most part getting their feet wet. Candie cleared the lapping water with a great leap, only to fall prone on the sand, and they laughed. In antiphony to the laughter, a burst of chattering sound came from a clump of trees not far up from the water’s edge, and small grey forms leapt from the perches from which presumably they had been watching, and fled inland.

Billy the steward said unnecessarily: ‘Monkeys.’ From his pocket he drew what Katey saw to be a small automatic pistol and lifted it, cocking his head behind the butt. ‘Little bastards!’ 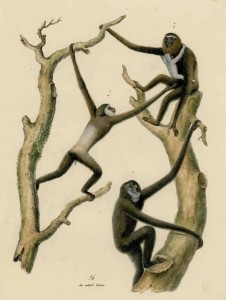 Katey was surprised and annoyed at the expletive: it was as though, here on shore, he was assuming an equality with the guests. She glanced at Sweeney, but he seemed to have paid no attention. Susan said:

Billy grinned, hefted the pistol, and slipped it back in his pocket.

‘Not meant seriously, miss. I’m not the kind of shot that can hit a moving monkey at a hundred yards with a Beretta, anyway. All the same, they’re nothing but thieving fleabags. Dirty habits, as well.’ He rounded on the Hawaiians, who were standing looking about them. ‘Come on! Get that gear out of the boat. And get the boat drawn up. We don’t want to have to swim for it.’