A spot of flame

A spot of flame had sprung up between two leaning palms on the headland; it broadened as they watched and the palms stood black against the gold, which sank from its first fulgent shock, but still could turn the eye away. 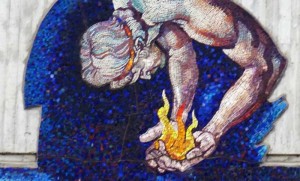 ‘It’s caught the Diana,’ Lydia said. ‘Look at the brass dazzling. It’s almost as though she’s on fire.’

‘She’s smoking, anyway,’ Candie said. ‘Did you leave something on the stove, Cookie?’

Katey could not see it at first, only the brilliance of sunlight on the brass. Then, as she watched, she saw the thin curl of smoke rising from behind the mainmast.

Yasha had begun to walk back towards the place where they had left Billy, and the boat. After ten yards or so he stopped and called to the Hawaiians: