They came into the Doldrums that evening. The sails hung slack and lifeless, the air itself had a dead quality, as though the great expanse of sky were boxed and shuttered, the sea flowed past in an oily calm marked only by the white scum of the Diana’s wake. It was oppressive below in the saloon, and the Japanese cook fell for the first time below excellence: he served them a Polynesian pork dish which was a little greasy. Willeway was glad to go up on deck again afterwards; Katey, the Marriotts, Candie and Lydia Petrie were playing some kind of poker dice in the saloon. 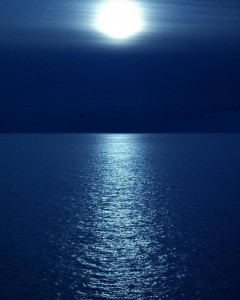 He made his way to the bow and looked out over the port rail. A half-moon hung a few diameters above the horizon; between it and the Diana a broad path was crusted with silver, bright against the dark viscid-seeming waters that otherwise ran away to the draped velvet sky and its guttering stars. He was conscious of the absence of accustomed sounds. The engine throbbed below decks, but he missed the creak and groan of stays, the whine and slap of the sails. Far out the crust of silver was broken by a moving speck; at first dark, then fiercely bright, then dark again. Perhaps a giant ray leaping.