29th September sees the UK publication in the Penguin Worlds classic science-fiction series of a new edition of John Christopher’s The World in Winter, in which the Thames freezes, the whole of Europe lies under snow and only the ‘lucky’ ones are able to escape to the heat of Africa – in a reversal of British colonial history where whites become the despised underclass, relegated to slums and considered fit only for menial work or prostitution. 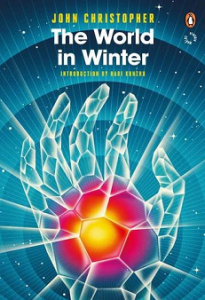 Snow, winter, ice and unrelenting cold are frequent themes in the writings of Sam Youd.

In The White Voyage, the journey of the Kreya ends when the ship becomes lodged in Arctic pack-ice:

‘When Mouritzen came up again, the sun had lifted clear of the ice. The sky was red all round it, turning to green and blue higher up towards the zenith. The pack-ice was spotted and stained with crimson, and those pools touched by the sun’s rays were bright and bleeding red. Where the sun did not penetrate, the water was a deep blue-green. It looked colder and purer than any water Mouritzen had ever seen.’

Snow and winter form the background to a number of novels set in Switzerland, including The Possessors (John Christopher) and The Gull’s Kiss (originally titled The Gulls in Winter: Peter Graaf).

In his first novel, The Winter Swan (Christopher Youd), the character of Rosemary Hallam is revealed, little by little, as her story is told from grave to childhood. It is prefaced by a poem:

… death in winter kills everything,
Forgotten in frost the swan lies still,
Songless under the jewelled hill. 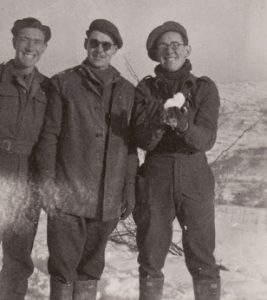 And in the first of the John Christopher books for young adults, Will, Henry and Beanpole flee the mind-controlling alien Tripods in search of the community of free men, ensconced in the eponymous White Mountains.

Born in the middle of an unseasonable Easter Day snowstorm, Sam Youd lived through the harsh English winter of 1946-47, when factories across the country were forced to shut (with four million claiming unemployment benefits), television services were completely suspended and pneumatic drills were used to excavate root vegetable crops, frozen into the earth. He recalled:

That was the bitter winter which started in January and went on until the middle of March.    Snow froze and rutted in the streets, turning grey, then black. Bread, which had not been rationed during the six years of war, now was, and potatoes soon would be.  The Socialist government, which I had so enthusiastically helped to vote in, struggled pitifully with the crisis: we drew blinds before putting on the one-bar electric fire, a punishable offence.

‘Fortunately,’ he concluded, ‘we were only a few yards walk from the Drayton, and beer was unrationed.’