He said: ‘A light. Can you see it?’ His voice was different.

Her own gaze had been concentrated on watching the patch of candle-light immediately in front of their feet. She looked up and saw that it was not delirium. Away to the left, there was a glow of light.
It brightened as they went towards it. Another cave was adjacent to this one, and the light was there. There was a noise, too. She could not believe that it was what it seemed. 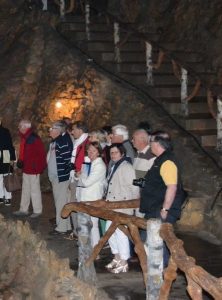 They turned a corner, and saw them: bare light bulbs suspended from a cable running back through the cave. And she had been right about the noise. There were about a dozen people in the middle of the cave, with a man in uniform pointing things out to them – stalactites and stalagmites, the wonders of the underground world.