She looked at the place where rock and water almost met, doused the candle and put it away in her pocket and then, waiting no longer, plunged forward head first and began swimming under water.

Without realizing it, she came up towards the surface, and the back of her head knocked against the roof. She forced herself lower, putting her hand up from time to time to feel if there was clearance. But the rock here came right down to the water; there wasn’t even the inch of space that there had been at the beginning. 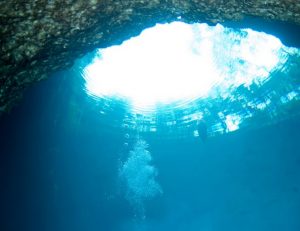 The strain of holding her breath was telling on her. She had passed the point at which it might have been possible to turn and go back, and it would not be long before the effort of continuing to swim forward would be too much. She put her hand up again, but this time felt no rock above her – nothing but water.

Being without orientation, her natural thought was that somehow she had been swimming down to a deeper level. She began to swim upwards hastily, careless of hitting her head on a submerged roof.
But her head broke water, and she could breathe again, painful shuddering breaths. Then she swam forward slowly, on the surface.