Why should brutes fare better?

Twice, on his way to the Scouts Hall, Martin saw a rat. The first was only at the end of the road from his lodging, a greyish streak scuttling along the side of a house. He had a clearer view of the second. It looked like an old buck, and was crouched under the light of a street lamp, worrying something in its mouth. It moved as he approached, but not quickly, crossing the road with a hunched hopping gait. Why was that so hateful, Martin wondered? One of God’s creatures, after all, made and loved by its Creator. And since God loved it, there must be a way for man to love it also.

There were more of them about lately, or at least they were more in 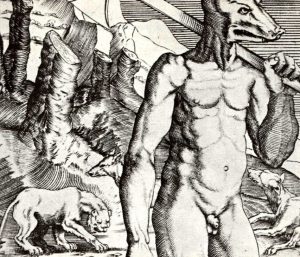 evidence. It was probably something to do with the haphazard and disjointed way in which the city contrived to go on living. Dustbins, for instance, were no longer always emptied on the same day, and might stand out for as long as a week. Or perhaps cats had lost their will to hunt and destroy their old enemy. When man lost courage and perverted his instincts, why should brutes fare any better? A different Revelation: not the lion lying down with the lamb, but the cat turning away from the rat.

The street lamps dimmed, surged back to brightness, dimmed a second time, and went. It was a dark night – the day had gone early under a massive bank of cloud which did not keep the cold out: he thought it might be freezing. He stood for a moment or two, accustoming his eyes to the blackness before going on. While he was doing so, the familiar roar grew out of silence somewhere to his left, swelled and became visible in headlight beams scouring the main road a hundred yards ahead. They went, and the sound went, too, dying slowly. He thought of the rat. One needed to be able to love man first, before making the attempt on the rest of creation.