James let the tumult die, and went on, starting quietly:

‘This was Caesar’s world, Brothers, and we rendered unto Caesar. We ministered unto the bodies of the poor, and washed our hands of their souls. We could deceive ourselves then. But now Caesar is dead, and his world is given over to the devils of his corruption. The lambs cry out in hunger. It is we, and we alone, who can lead them to the crystal springs, the meadows of sweet grass. Shall we fail in this? Shall the lambs starve, for want of the shepherd’s care?’

Silence again. The eyes, no longer weak but full of fire, searched their faces. Gilliatt said, reluctant but half convinced:

‘Few! I count more than there were apostles. We are few, but will be many. The Lord said: “Go out into the highways and hedges, and compel them to come in.” We have but to seek and we shall find those who will help us to carry the burden – the burden which is joy to the spirit.’

Not Gilliatt this time, but Len Pearce, the ironmonger:

This time James did not answer. He stared at Pearce and let the silence grow round him and the words he had spoken. The silence was like a light, showing up their pettiness and futility. It lasted for minutes, and it was not James who ended it. Gilliatt shouted:

They sang, in rough unison. Martin felt none of the self- 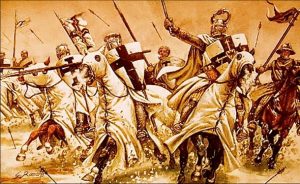 consciousness which normally overcame him, only a carefree, intoxicated happiness. He was aware of the discomfort of the cold, the pain of it in his bad fingers, but differently. Like the martyrs, he thought, accepting pain as joy, degradation as glory. Only the beginnings of what they must have felt, but the beginning was a triumph in itself. He looked at James, who was not singing but staring at them all, exalted.

‘Forward into battle,’ he sang, ‘see His banners go!’