For the first time since the fall, Albrecht spoke. His voice sounded dazed, almost disbelieving.

‘I am not sure, but I think perhaps two could be saved.’

‘If you cut one of the ropes, there will be only half the weight on you, Cynthia. It is possible that you might be able to lift the other – enough so that he may get a foot-hold, and climb.’ 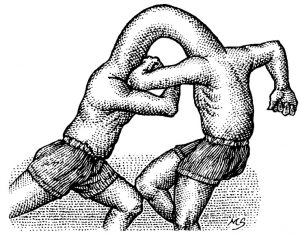 A silence followed. There was only the noise of the plunging water.