Stuck in a rat trap

With Albrecht, she watched him wriggle into the hole, his body, as he progressed, cutting off more and more of the light, until they were left in darkness. They stood close together, aware of each other’s breathing and of the cheerful chuckling noise of the stream.

‘I think that we shall get through. I am sure of it.’

The lifeline jerked tight. She heard Henry’s voice, muffled and indistinguishable, and called up the hole to him.

Although still muffled, she could understand what he said next: ‘I think it will go. I want you to come in after me. Push the stuff in front of you.’

She said to Albrecht: ‘If we all get stuck in that rat trap …’

‘It will not happen. Come. I will help you to get in.’ 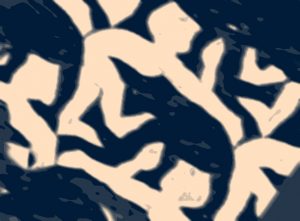 She felt the solid rock close around her, touching her all along her body, with intimacy and ghastly strength. She inched her way forward, responding to Henry’s tugs on the line. She went, as he had told her before, on her side, but several yards in the pipe closed down, and she had to crawl forward painfully, her face against the rock and the rock pressing also against the top of her head.