‘I am the Captain of this ship’

The noise of chatter died away as Olsen came in through the swinging doors. He had presence, Mouritzen reflected – a mysterious quality. When he required attention, it was given, without hesitation or stinting. Now he stood, looking round the table for a moment before taking his seat. He smiled, almost boyishly.

‘Well – you have seen the mountains?’

He allowed the murmur of acquiescence to die down, and continued:

‘That is Greenland,’ he said, ‘our Danish empire! On this side of those mountains lies the settlement of Scoresbysund. After all, the storms have brought us within sight of haven. Now all that remains is we take a little walk over there.’ 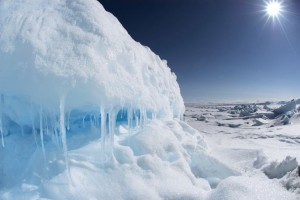 Despite the obviousness of the implication, Mouritzen was staggered by this. His protest came automatically:

His eyes on the others, Olsen nodded. ‘A little walk,’ he repeated.

‘But the risks!’ Mouritzen protested. ‘That stuff is moving all the time. At any moment a floe might break up beneath you.’

Olsen turned towards his First Officer. His eyes were narrowed: his face showed something of a sense of betrayal. Mouritzen realized that he had come down prepared to meet and to beat down the objections of the others, but that, despite having failed to take him into his confidence, he had expected blind and unquestioning support from his deputy. The expectation had clearly been so certain that for a moment Mouritzen felt that it must have been justified.

Olsen said: ‘I am the Captain of this ship, Niels. I take no unnecessary hazards. You know that.’