Dimly through the mist it was possible to see a long, unbroken line of white, without beginning or end. From it came the now familiar throbbing roar, louder and heavier.

‘My God!’ Mouritzen said. ‘We must be within a couple of hundred metres of it.’

‘A little more, I fancy. Perhaps three hundred. And a current – one knot, maybe. So in ten minutes we make our ice-fall.’ He grinned. ‘I do not think we shall manage to get a head of steam up in that time.’

‘We trust to luck. And we must hope she will keep her screws clear of the ice.’ 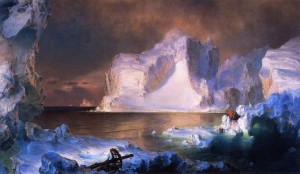 The line loomed nearer out of the mist as the minutes passed. There was no break. It appeared to rise no more than a foot or two out of the sea, but the greater bulk, naturally, would be below the water-level. As they approached it, Mouritzen could see individual turrets and blocks of ice rising out of the featureless mass, and could see, too, that the vast plain was in slow, undulant motion, as the tide lifted it and sucked it down again. The sound, also, broke up as it grew louder; one could hear the crashes and grindings of individual encounters.

‘I never thought ice would frighten me,’ Mouritzen said.