Albrecht had nearly reached them. She looked down towards him now, watching him come up the last two or three feet. She could hear Henry, above her, shifting his position to make himself more comfortable. Then there was the sudden rumble of shifting rock, and she glanced quickly upwards to see what was happening.

She had a brief confused glimpse of stones falling towards her, of Henry sliding, trying to regain his balance and failing, before his body cannoned against hers as he fell down towards the gap from which they had emerged. The lamp was wrenched from her hand and clattered down the slope. She herself fell across the spur of rock. Just below her, there was a muffled cry from one of the two men, or from both, as Henry collided with Albrecht. Then a great weight pulled her downwards, pinning her immovably over the spur. The breath gasped from her body, and she could only breathe in again with difficulty and pain. 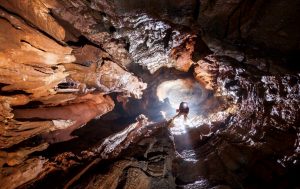 There was still light. She saw now that the lamp had come to rest on a part of the ledge, and had not broken. Its light fanned up to her, and showed her what had happened.

Henry, in falling, had knocked Albrecht off the irons. The two men hung side by side, like marionettes, attached to either end of the lifeline, which pinned her down to the spur of the rock.