The pipe turned into a gallery. It was neither wide nor high, but it led upwards. It was also damp, with drops of water oozing through the ceiling onto them. Henry called another halt for a rest, and they crouched together. Cynthia remembered a time, when she was a girl, of crouching with boy cousins inside a small and rain-dripping tent. We were all miserable, she remembered with surprise, because it was raining.

Albrecht said: ‘Your headlamp, Henry – the battery is almost gone?’

‘I give it another five minutes.’

‘And then?’ Cynthia asked.

‘And then?’ she whispered. 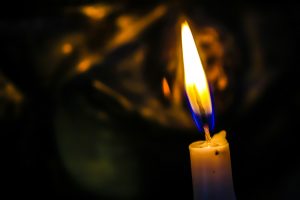 She said: ‘I would rather go on. We’ll have plenty of time to rest afterwards, won’t we?’

When the headlamp had faded to a dim glow that showed nothing ahead, Henry lit the acetylene lamp. Cynthia remembered what he had said: about an hour’s charge. Unlike the torches, that really meant an hour – the lamp could not be flicked on and off for economizing. They had been wandering for two days and nights in this warren of caves; it was futile to imagine that another hour would see them to safety.