He leaned forward a little. The table was far enough from the others for their conversation to be private when spoken quietly. He did this now, his eyes intent on her face. The flush deepened, stinging her cheeks with blood. The sentence was grossly obscene, both in meaning and in the expressions used.

She remembered how her open contempt had checked Mouser and wondered, for a moment, if it would work here, but a look into the raw bony face that stared at her, the jaws chewing on breast of chicken, made her realize that she lacked the courage to try. She said, awkwardly:

‘But you will, though.’ He picked up his glass, drained it, and poured more wine in. The small grey-green eyes came round to her again. ‘You will.’

The words in themselves had not shocked her. They were not a part of her general vocabulary, but she had used some of them and heard the others from Walter’s lips. What was horrifying was the form of the request, the circumstances, the eyes watching. She said: 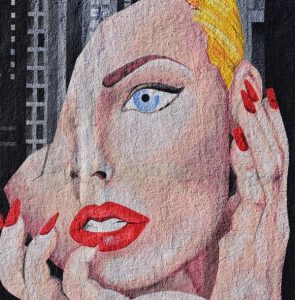 He studied her, then shrugged. ‘If you can’t …’ She felt a relief that came close to being gratitude to him for not insisting. He returned to munching his food. He was a gross eater, as Walter had been, but in a mean and gobbling rather than a large way. He prodded half a dozen chips on to his fork, rubbed them in a pool of vinegar on his plate, and stuffed them into his mouth. He sucked and smacked as he ate, and broke off to say:

She started to get up. She was on the point of saying ‘Thank you,’ when he added:

‘Send Linda over instead. She’s got a voice a bit like yours. I’ll get her to say it for me.’

‘Please …’ She struggled for words. ‘Commander …’

She sat down again. Looking away from him, she repeated the sentence in a low voice. He said:

‘You remembered it very well. Now say it again, and just a bit louder.’