Ape said: ‘All right. Sort yourselves out.’ His voice was unforced, casual. ‘Shove him in the ditch for now. Get your bikes jacked up.’

Rod stood up along with the rest. Those who could: one of them lay there, moaning. Two of Ape’s party picked him up, to the accompaniment of a howl of pain, and sat him on the pillion of one of their own bikes. They moved the Commander’s body to the side of the road, and pushed one of the crashed bikes there. The other three appeared to be all right. The yobs mounted and stayed, waiting for a signal from Ape, who still stood watching operations. He looked 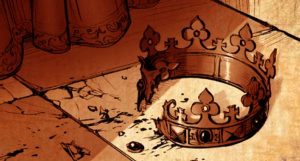 round unhurriedly, as though checking that nothing had been overlooked. His gaze, traversing, came to Rod and paused for several seconds. The look was cold, not hostile except as part of a general hostility towards anything in the world which did not serve his purpose. In that moment, Rod realized what had taken place. The Commander was dead – long live the Commander. He realized something else: that his life hung on whatever whim prompted the mind behind the face of this young savage.