On his birthday, as well …

Rod did not pay much attention until he realized that the call was from Bridge House, and that something unusual, perhaps shocking, had happened. After that, he listened, but could not make much sense of it. The Commander said:

‘Why wasn’t I told last night? Because you’re scared of him, you mean. That little bastard! … OK, OK. I’ll see to it, when I get back … Some time today … All right, ring off … I’ll remember you called me.’

He put down the instrument and stared at his plate of sausages, fried eggs, kidneys and bacon. One of the yobs asked:

‘Ape.’ He forked a kidney and chewed it, but with less enthusiasm. ‘He put a shiv into Cha-Cha last night. That was Spoonbill calling. Sneaked to the telephone to tell me.’ 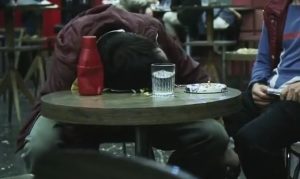 They sat in silence for a moment. One said:

‘Could have been an accident, I suppose.’

‘Then why didn’t Ape ring me himself?’

‘Maybe he was scared, too.’

The Commander slammed his cup down into the saucer, so that tea splashed over the white cloth. His face was set and angry. He said:

‘If he was, he had good reason to be! Sticking old Cha-Cha. On his birthday, as well. By God, when I get back there …’