I ought not to have fallen asleep like that

When she awoke it was to the guilty realisation that, having dozed off like that, Ruth might have herself woken, and seen the glass on the table between them. This was the first part of the shock of seeing the other bed empty: Ruth had woken, perhaps gone to the bathroom, and Ruth had seen that she was drinking. She felt a sweat of shame break out on her. It took a moment or two of waiting, listening for returning footsteps, wondering how to carry it off, before she remembered why she was here – that she was supposed to have been watching her.

She got up then, quickly, not bothering about the glass, and hurried out of the room. The bathroom door 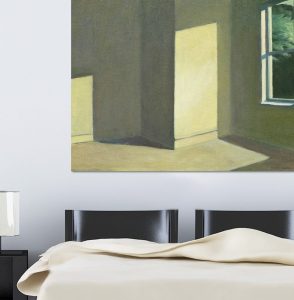 was closed. She rapped on it, received no answer, and turned the knob. The door opened, and the room was empty. She checked the other rooms on the floor, but without much hope. The bathroom on the first floor … she might have thought this one was occupied, and gone there. It was a slim chance, but she went, anyway. That door was also closed, and once again there was no answer when she knocked. But this time it did not budge when she tried to open it.

George, when she told him, wasted no time. He raced upstairs, threw himself against the bathroom door, and burst it open. Following close behind him, Mandy saw that there was no one in the room, and also that the window on the far side was open. A little powdery snow was blowing in; falling from the roof presumably since the sky was clear and blue.

It was the easiest way to get out of the house unobserved. There was a lean-to-roof three or four feet below the window ledge, sloping down. The drop from that to the ground was not more than eight feet, and into thick snow. It was possible to trace her progress: snow scuffed along the roof and a hole marking the place where she had jumped down.

Mandy said wretchedly: ‘I’m sorry. I ought not to have fallen asleep like that.’