It was surprising how often submissiveness in women concealed a potential domination, particularly with unpleasantly cocky men like Deeping. Domination, and that same indifference she had charged him with showing to the children. Even before they were born, he did not think she could have felt anything for her husband.

He said quietly, but firmly: ‘It will have to be done, Ruth. You must accept that.’

She shook her head, her eyes hating him. ‘No.’

‘I’ve seen the room. It’s clean and cool. The best place, I promise you.’

She said something which he did not catch. He asked her to repeat it. Her voice thick with horror, she said: 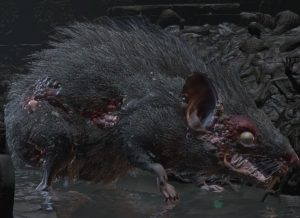 He said compassionately: ‘No. There are no rats here – George has assured me of that. And the room is quite bare. You can see that there’s not even a mouse-hole.’

He put a surgeon’s authority into his voice. ‘As a doctor, I insist.’ After a pause, he went on: ‘You were worried by the thought of rats. Have you seen what the human body looks like when it starts to corrupt?’