Hours of wakefulness lay ahead

When he awoke, he glanced at his watch, and saw by the luminous dial that it was a little before three. He was wide awake and knew, from past experience, that hours of wakefulness lay ahead. He snapped on the bedside light. The room was all round him, different in its details, but the same lonely cell he had left behind. The oil painting of the Matterhorn, seen for the first time the previous afternoon, was already agonizingly familiar. 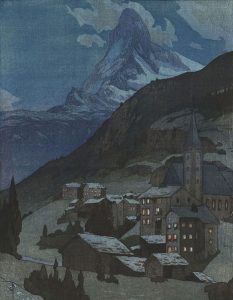 It was warm, stuffy almost, with the windows closed and the radiator full on. He put on his dressing-gown, opened the french windows, and stepped out on to the small balcony. There was no wind, but it was sharply, bitterly cold. The moon was absent from the sky, but starlight glimmered brightly on the snow. He thought he could almost see the slopes of the mountains on the other side of the valley, but that was probably a trick of vision. Far down and to the right, he did see something, a cluster of lights. A village, probably, but where? On the shore of the lake, perhaps. He would identify it in the morning.

It was too cold to stay out; he went in, closing the windows behind him. His bookmark, he saw with some concern, was not far from the end of the book. He had a couple of others with him, but he had better be careful until he knew what sort of reading supply there was locally. He had thought of bringing more books, but the idea had seemed a weakness, like taking one’s umbrella when one has been assured the day will be fine. And most desperately wants to believe it.