Being awake when everyone else is asleep

Selby took a deep breath, and raised his glass.

‘Cheers,’ she said. ‘There’s something funny about being awake when everyone else is asleep. Don’t you think?’ She looked about her. ‘And with this lamp light … It makes everything strange …’ 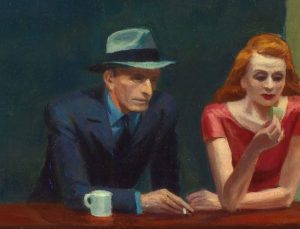 Her voice trailed off. ‘… and romantic,’ Selby decided, was to be inferred. No, not characteristic. She might even say no, if he did pick up the cue, though he did not think she would. It was the crisis atmosphere, probably, which had done it. Weren’t some forms of danger supposed to have that effect on women? But there was no point in wasting time in abstract speculation. The situation demanded action or, rather – if everyone were to be kept happy and future doors, at the same time, kept open – some fast talking.

He said: ‘Is your sister a fairly heavy sleeper?’

She rose to that one, and bit hard. ‘Jane? Very heavy.’

‘Yes, I would have thought that. People are sometimes a bit misleading, though. Take Elizabeth. Very restless at night – always waking up. And given to wandering. I’m surprised we haven’t had her down here already.’

An arrant lie, but one of which, he was fairly sure, Elizabeth would approve. He looked across the bar, and held the girl’s eyes for a long moment. She smiled at him, and gave a tiny shrug. Accepted, he thought with relief. The danger was over.