We had walked on the drive itself, with gravel softly crunching under our feet, but suddenly Sir Donald put a hand under my elbow and steered me on to the lawn. The grass was heavy with dew and I was glad I had stout boots on. We went across to a point roughly at the lawn’s centre where stood one of the ornamental trees, a huge holly, ingeniously fashioned into the shape of a man on horseback.

‘Do you know who that is, Jane?’ I shook my head. ‘It is meant to be King Arthur. Look there – see the scabbard, and the sword’s hilt above it? Excalibur, the sword that was given him by the Lady of the Lake. You can see better by day how well the branches have been trained and trimmed. Old Hawkins, my head gardener, has been working more than a score of years on it.’ 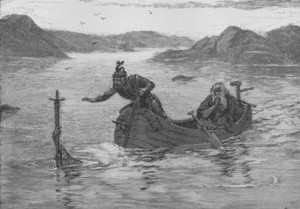 I was impressed but puzzled. I had a feeling that there had been a purpose other than mere recreation behind the suggestion of this stroll, and that it concerned the tree. I stared at the leafy shape, towering above us in the dusk, supported on its gnarled and knotted trunk.

Sir Donald said: ‘This is Arthur’s country, Jane: the last of the real old England, Roman England. And Arthur was the last Roman, defying the Saxon invader, reconquering the rest of the country and giving it Roman order again. He failed, in the end, through treachery, but first he had so bloodied the Saxon noses that ever after they walked warily in the south-west. And it is said that at some time Arthur will return, in one form or another, and this time triumph completely. Every true Cornishman believes it.’

He spoke with a vigour unlike his usual measured calm. I thought I had no need to do more than listen, but he turned to me abruptly and asked:

‘Do you know where Arthur lived?’

‘Was it not Camelot?’

‘It was. And where was Camelot? Many places claim the honour. Winchester, for example, with its foolish Table, no more than a few hundred years old. The Saxons trying to claim our king!’ He spoke with scorn. ‘But Camelot could only be in Cornwall. Do you know what lies down there?’

He pointed far out into the northern twilight.

‘The sea, yes. And Tintagel. Arthur’s birthplace. No more than fifteen miles from here. You have heard of Lacdam, nearby?’

I remembered the wild figure on the moor, and his threat to Beast. I nodded my head, and Sir Donald went on:

‘And do you have a little French?’ I nodded again. ‘Is it not possible that Lacdam once was Le Lac de la Dame? There is a lake there, and the ruins of a castle. So, close together, we have Tintagel where the King was born, and Lacdam where he was given his sword.’ He spread out his arms. ‘And here we have Carmaliot! This house was built on the ruins of a much older one. In our cellars there are signs of more ancient stonework still. So is it not likely that Carmaliot once was Camelot, the King’s stronghold, set on the edge of the high moor and within sight of the sea?’

I did not know what to say, but he did not seem to require an answer.