First sight of the island

Sarnia went up on deck with the Jelains and stared about her. The morning was blue and still, the sea a deeper blue, with only the gentlest of swells on which the mail packet rocked, her paddles silent and motionless.

They were less than half a mile from shore and she gazed with eager interest at the island. The sight it presented was captivating. Behind the small harbour a town stretched away on either side and up the slopes of the hills behind. At the centre the houses, tall and thin, were packed close, but further off there were villas with gardens, a patchwork of white and green bathed in the slanting rays of early sunlight. 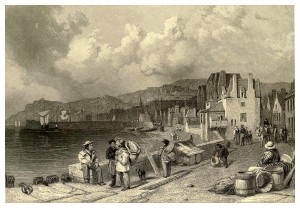 Mrs Jelain asked: ‘How do you like your first view of St Peter Port?’

Sarnia said: ‘I don’t think I have ever seen a place so pretty.’

‘That is our house.’ She pointed to the northern outskirts of the town. ‘On the hill there. No, a little further that way. Just above the group of small houses – do you see?’

Although a long way off she could see that it was a big white house, built in the Regency style, with a long terraced garden beneath it and an imposing conservatory to one side, reflecting silver sunlight. The Jelains pointed out other landmarks: the town church, the Assembly Rooms, higher up the square shapes of Elizabeth College and Castle Cary. Then they directed her attention the other way, towards the offshore islands, identifying them by name: Herm, Jethou, further off the long line of Sark with the sun above it, and south and north the shadowy outlines of Jersey and Alderney.

‘We are at the centre of things here,’ Mr Jelain said. ‘Jersey and Alderney are both nearer to France, but we are better off where we are.’

‘Can one see France?’ Sarnia asked.

‘Sometimes, but at present the haze hides it. You would see the coast along there, to the north of Herm. Near enough – too near for our liking. We have had enough trouble with the French in the past, and with this new Napoleon they are making so much of we may have trouble again before long.’

‘Do not mind now about politics,’ Mrs Jelain said. ‘The boatmen are coming out for us.’