‘The position of women in our society is a thing that troubles me deeply. For all the progress we have made and are making, for all the advancements of science, there are respects in which even mid-nineteenth-century England is a dark and barbarous land; and its treatment of the female sex is one of these.

‘Until a few years ago, women were made to work in coal mines, harder than a liberal man would work an animal. 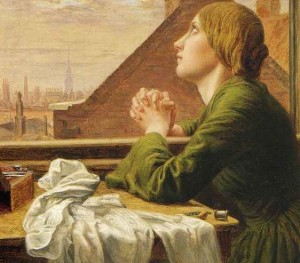 But though that brutality has been suppressed, there are many others. I met a lady last evening who was very proud of her dress. Almost twenty yards of silk, she declared, had gone to the making of it! And how many hours of soul-destroying labour, I wonder, by some wretched girl, ruining her eyes in a garret for a pittance of reward? You know Mr Hood’s poem, “The Song of the Shirt”? The Secretary of a philanthropic society in which I have an interest tells me that during the present season girls work eighteen hours a day to keep up with the trade’s demands – some even longer. It is little wonder that many of them, rather than continue in such heart-breaking toil, turn to a life of shame.’

‘I beg your pardon, Miss Lorimer, for speaking of such a thing in your presence, though I am not sure that I should. My own daughters, had Fate willed things differently, might have been such girls as these. You yourself might.’