The door was open, and a blare of pop music came from that and the windows, also open. In the hall, a couple were standing in a corner, kissing, their bodies pressed together and motionless; the girl’s hair was dyed in the fashionable shocking red. Beside the Pembroke table there was a mess of vomit; on it, a couple of half-empty glasses and a third which had been broken. 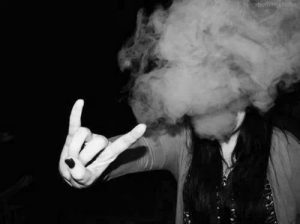 The racket, at this range, was tremendous. He went through to the green sitting room, and found it full of teen-agers. They paid no attention to him – most of them were doing the new step which involved hands on each other’s shoulders, a fixed mutual but blank stare, and a sideways oscillation of the torso. One girl was leaning perilously backwards from a window, with a boy seemingly pushing her out. She had a blue sweater rucked up under her neck, and a black brassiere underneath that had been undone. She was no-one Rod had seen before. Cigarettes had been ground into the pale lime nylon carpet, the cocktail cabinet was open and littered with bottles. Someone had drawn a phallus on the wall with a fibre marking pen.

He went through to the room beyond, where the Grundig radiogram was on at full blast. Four couples were dancing there, avoiding a corner where someone else had been sick. Rod switched the set off. One couple continued to jerk to and fro; the others stared at him.