The Possessors had a long memory, but not long enough to encompass their origins. At one time, it seemed likely, they had had a separate life, but for aeons which were now uncountable their life had been bound up with the – to them – evanescent lives of the Possessed. Without them, they could not act or think, but through them they were the masters of this cold world. They raised cities above the ice, spun on strange sailing craft across the vast deserts of snow, conquered at last the chill cloudy skies. All this they did, living in the bodies of the Possessed, at once united with them and remote from their brutishness. It was not that they despised their hosts who were their slaves; in a way, and insofar as the term had any meaning in their experience, they were fond of them. When the disaster came, they would have saved them if they could. 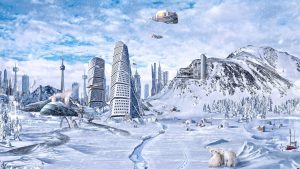 With a longer warning, it might have been possible. Already their rockets had reached the planet’s two moons, had probed towards the three other worlds that made up the family of this sun. A century would have been enough, even fifty years. But the facts were clear, the extrapolation certain. In less than ten years their sun would explode, turn nova, increase in size until the planet’s very orbit lay inside its flame and fury. There was no way of saving the Possessed from their fate.