The morning was grey to match my feelings, and bitingly cold. Sir Donald was handed in to sit with his back to the coachman, and I was placed opposite. I was permitted to have the window open to wave goodbye to Harry, who ran out of the inn yard following the coach and stood in the road looking after us, his right arm flourished high above his head. When the road bent and took him from my sight and I sank back in my seat, Sir Donald closed the window. I had been provided with a rug and he tucked it round me, asking if I were warm enough. I nodded, too full of misery to speak. 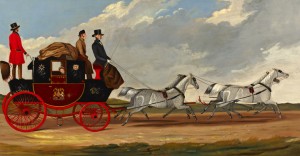 I felt I hated this man almost as much as I had hated my father, though in a different way.

My father’s brutality had been closer and coarser; his was cold and more detached, but none the less real. To both I had been an object rather than a person.

I hated him, but knew I must not show it. The die being cast, the game had to be played out, at whatever cost. I was a hostage for Harry’s future, for the very survival of Mama and the girls. Anger or sullenness might jeopardize the precarious bounty which they looked for from him. Since I was to be a sacrifice, I had better be a smiling one.

At this moment, though, try as I would, I could not bring myself to smile or talk. Fortunately, Sir Donald did not seem to mind. He would expect me to be unhappy at leaving my family; and in his conceit of himself would not look for resentment. I had been foolish but had been brought to see the error of my ways. That was enough for him.