I came on him unexpectedly, the morning after my arrival. Walking in the garden I turned the corner of a high box hedge and saw him lying in my path, dozing in the wintry sun. I was unsure for a moment whether it really was a dog I saw; his ugliness was so great as to give cause for doubt.

He was black and white in colour but with none of the decorative and harmonious blending of those opposites that the carriage dogs showed. His blacks and whites clashed in jagged streaks and distorted splotches. Nor did his coat have anything of their glossy smoothness; it was shaggy and un­kempt. His face was grotesque, with large hairy ears like flaps on either side of a white pointed muzzle across which a twisted stripe of black had the look of a scar. 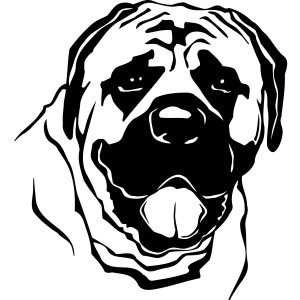 Apart from his ugliness he was a big dog, and I viewed him with trepidation. (I had not met the mastiffs then, or I should have been more nervous still.) As he opened an eye and stared up at me, I had a mind to beat a retreat. But his timidity was greater than my own – scrambling awkwardly to his feet, he backed and then ran away. He was an even more comic sight in flight than he had been in repose. I could not recall seeing an animal so absurd.

Before we met a second time I had learnt something of his background and origin. The bitches were normally kept confined when they were in season, or mated with their own kind, but a couple of years earlier one of the carriage dogs had by accident been allowed to couple with one of Edgar’s mastiffs. (I was told it was by accident; knowing, as I later did, Edgar’s quirkish sense of humour, I could not be sure it had not been deliberate.) She had had a mongrel litter of four as a result.

Three of them were given to a groom to drown in the water-butt beside the stable door. The fourth was so much uglier even than his brothers and sisters that Edgar, fascinated with the spectacle, reprieved him from a similar fate. It was he, the mother bitch having the name of Beauty, who called him Beast.