It may come in useful

What else do we have in the way of tools?’

Yasha produced from his pocket a Swiss Army knife. Candie had seen a similar one: they were equipped with various small tools as well as the normal blades.

‘This,’ he said. Sweeney nodded. He turned back to Billy who was at the boat examining the lockers. ‘Billy!’

‘Do you have anything we can use as a tool. A knife?’

‘No.’ He shook his head slowly, staring at Sweeney. ‘Nothing like that.’

Sweeney’s gaze held his. ‘But you do have a weapon.’ 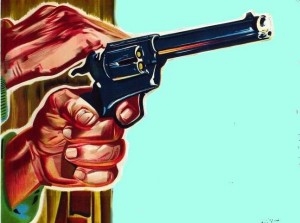 Billy put his hand in his pocket and, after a moment, brought out the gun. It lay flat in his hand. Sunlight kissed the blue metal. It drew their eyes. Billy said:

‘It may come in useful,’ Sweeney said.