A little surprise for your guests

Sweeney said: ‘Captain Cranach has sold me the Diana. I shall be running her myself.’

‘I was at sea,’ Sweeney said, ‘as a younger man. My ticket is still valid.’

He spoke with a simple yet majestic confidence. Cranach said:

‘A little surprise for your guests, eh? No need to worry, Miss Malone. A boat like this, with a crew like she has, runs herself. The skipper’s not a lot more use than that wooden painted lady under the bowsprit.’ 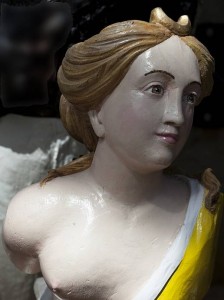 ‘The others don’t know, either?’ Susan asked Sweeney. ‘None of them?’

‘No,’ Sweeney said. ‘The point did not seem worth mentioning.’

Apprehension was succeeded by a feeling of strangeness, of excitement almost. She looked at Sweeney and thought: we are in his hands, denizens of his small world. He had not told her, or any of them, of this, but had been willing that she should find out. It was part of a monumental indifference. And yet she did not feel that he was indifferent to the party he had brought with him. She wondered, should she tell the others? Sweeney looked at her.

‘Do you regard it as a point worth mentioning, Susan?’ he asked.