The lawn behind the Manoir was even better kept, of still more ancient tending, than the one in front; but where that had a circle’s regular shape, this stretched out among cypresses and gnarled magnolias until it merged into woodland. That was on either side. In front the view was open, to the sea and rocky cliffs that ended in a jagged group of huge granite teeth: the Pea Stacks, the General had told her. 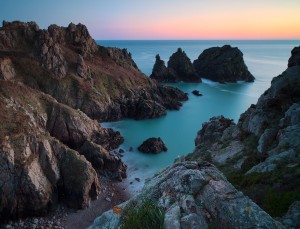 The best outlook was from a rustic summer-house close by the tall blue-green candle of a spruce, and Sarnia sat there on a sunny autumn day. She had a book with her, but was not reading it. His footsteps were soft on the lawn, but she heard him coming and looked up.

Peter said: ‘Tea will be sent out shortly. May I sit with you?’

She nodded, and made room. After three days it was still difficult to believe in his physical presence. She wanted to stare at him, but instead looked away.

He had told her the story of his escape from drowning – how he had clung all night to a rope of the upturned boat and in the morning, drifting somewhere between Guernsey and Alderney, had been sighted and picked up, on the extreme edge of exhaustion, by a vessel bound for South America, for Port of Spain. He had thought her dead, as she had him, and had made a vow to bring Edmund Jelain to book. Because of the need for secrecy which that involved, he did not try to communicate news of his survival even after they reached port. Instead he shipped as crew for the return journey.

He had told her all this and she had listened and marvelled, thanking God; and yet she could not believe it. She had a need to touch him that was like the needs of hunger and thirst. She felt it again now, but did not yield to it. She pulled away the fold of her dress that lay close to him on the garden seat.