They climbed the long slope towards the dark barren horizon in the east. Where the cranes and chimneys of Portsmouth had been there was 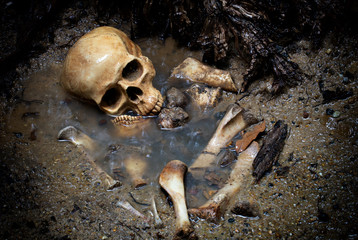 nothing but the same grey waste. From time to time there was evidence of the city’s destruction and scattering – bricks, boards, odd articles. And human debris. But these were reduced, by time and possibly scavengers, almost to the anonymity of skeletons, with just a few rags of flesh adhering to the bones. They lay cold and odourless and insignificant in the dusk.

They found shelter after all, not far from the tide mark: a hut which had been swept from someone’s back garden, on the very edge of the wave perhaps, and dropped here almost in one piece. The door had been wrenched off and there were a few boards missing, but apart from that it was in good shape. Inside there was a drift of soft sand and, as they found during the night, sand-fleas. They slept fitfully. Billy was tossing and turning a lot, and seemed to be having bad dreams. It did not rain much, but in the morning set in as a steady downpour. They had a cold breakfast from a tin, and stared out at the sopping grey sky.