He stood on the balustrade at the top, and saw the seething mass fighting all round the top of the Square. Many of the yobs had retreated to other vantage points: one was firing from the top of the Washington statue. But more were enmeshed in hand-to-hand fighting, slashing with their knives. He saw one of them gripped from behind by a white-robed figure, while a man in a blue suit punched and kicked him from the front.

The yobs were fighting hard – fighting, in reality, for their lives – but the wave of God’s followers was relentlessly spilling over them. Power into our bare hands, he thought. And people were still coming into the Square, turning the flank of those yobs who continued to maintain some kind of order. Even as he looked, the porch of the National Gallery was stormed, to a new roar of triumph. Someone had got hold of one of the loud-hailers, and was shrieking through it, over and over: 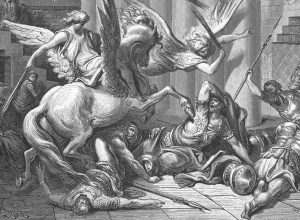 He felt a blow in the arm, almost spinning him backwards off his perch. He looked down and saw a hole, with blood welling out. It roused him to joy and fury. Leaping down, he battled his way towards the nearest yobs.

There was no pain in his arm, but a terrible strength.