They walked through empty streets in the cold grey dawn, down the long road to Kennington, the still longer one to the river. Martin was at the front, near Brother James: there were perhaps two hundred of them, white-robed, silent. They had prayed through the night, and had not broken their fast. Tiredness, dullness came in waves; but so did exaltation. He felt light-headed, and the tramp of feet sounded like a dull surf breaking on a deserted beach. From a dark sea to an unknown land, whose present shadows might hide a rich and fruitful country, or a wasteland. 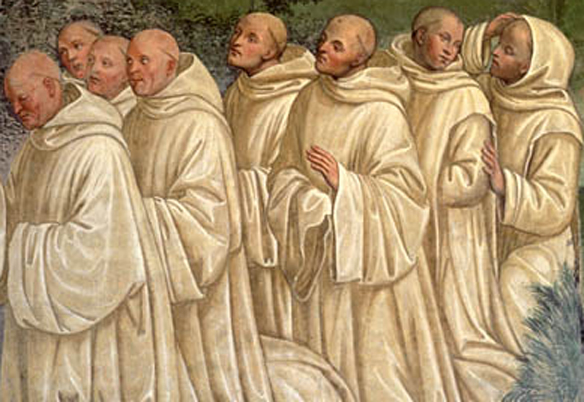 Fear brushed him as they came in sight of Lambeth Bridge. To the right of their path, on the road leading to Westminster Bridge, half a dozen yobs straddled their motor-bikes. They made no move as the Brothers went past them and up the slight rise of the bridge, and did not jeer as they usually did. They merely watched, in as close a silence as that of the Brothers. It was a watchfulness more ominous than noisy mocking would have been. He looked at Brother James, marching ahead of him, and took courage.