Looking into the cauldron

It happened very quickly, and without the others’ being able to make out much of what had happened; they were at the point in the crossing where the light, from either source, was least effective. A stone must have turned under his foot. They saw him stagger backward. He appeared to let go of the holding line to try and get his balance, just as Heather clutched at it for support. In a moment he had fallen over the foaming lip of the waterfall. Heather fell at the same time, but one rope held her and she held the other. She stood teetering on the very edge, the water washing round her legs, looking down with terror into the cauldron.

They saw Peter come to the surface of the furious water, and that he was making some attempt to sustain himself against its buffeting. But his efforts were feeble. Albrecht quickly took the electron ladder from Cynthia and began to unroll it. Heather looked to see what they were doing, made some undistinguishable cry, and looked back to where Peter was struggling. The cauldron was carrying him towards the outlet.

Cynthia said: ‘She’s untying herself from the lifeline!’ 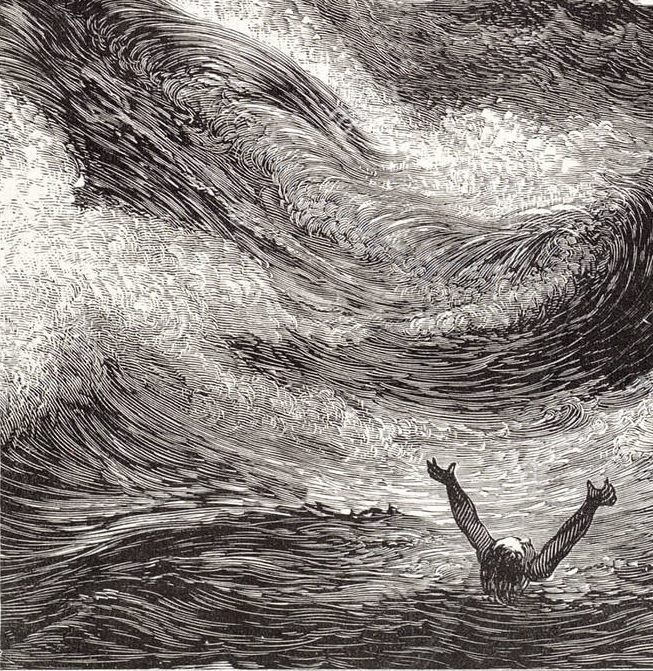 Albrecht had uncoiled the ladder, and now threw one end down to dangle in the churning pool. As he did so, Cynthia saw that Heather had freed herself from the rope. She stood briefly, one hand on the holding line, and then dived off the edge into the pool below.

It was difficult to see things very clearly in the light from the acetylene lamp. A swirl in the water looked as though it might be Heather coming to the surface, but when Cynthia looked more closely the swirl had vanished. She could see Peter, though. He struggled with increasing weakness, against the current pulling him on. When he reached the outlet, he tried to raise himself to hold onto the rock face, in a last attempt at survival. His fingers clutched at the low arch for perhaps a second, and then were gone.