The atmosphere stayed good-humoured until they got to the Civic Centre. By that time they numbered several thousand. The leaders, with the microphone and amplifiers, took up their position at the top of the steps, and their followers occupied the lawns and spread out over the ring road that encompassed the municipal buildings. Jane and Walter remained on the fringe, to maintain the appearance of his non-participation, as far as the official side of things were concerned. She had become separated from him during the milling that took place as the procession came to a halt, and was now surrounded by shop-girls in the new hip-briefs, with bare midriffs, and their boy friends in khaki drill, some of them wearing puttees. She looked for Walter, but could not see him. What she did see were mounted police coming up the hill from the station.

Others saw them too. There was a formless shout, followed by particular cries. ‘Watch out for the Mounties!’ ‘The bastards on horses!’ The mounted police trotted around the perimeter of the crowd, aloof and remote, apparently disregarding the clamour entirely. On the steps, there were a couple of oscillating howls from the speaker, and it came into action. Somebody – Jane thought it might be Pinkard – spoke, his voice booming distorted across the packed heads.

‘We are warning the police. We will not tolerate …’ A roar of applause drowned his voice, and he had to 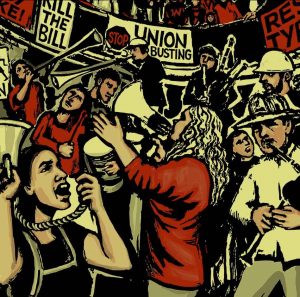 wait for it to die down. ‘We will not tolerate interference with our democratic right to hold a public meeting in protest against the fascists in Whitehall. We will defend ourselves against any attempt to suppress free speech. The old men in Whitehall are not going to keep the youth of this country under. The men on horseback are not going to cuff us out of the way as though we were peasants. We will …’

The roar swamped his words again, and this time kept up. It was part applause, part high spirits, part anger. The police horses slowed to a walk, but went on round the edge, their riders staring impassively ahead. Through the din, Jane heard an individual voice shout:

There was a banner nearby, with the words: WE’RE TOO YOUNG TO VOTE BUT WE STILL HAVE TO EAT. Some boys in pseudo-uniforms grabbed it from the girl students who had been holding it. They ripped the cloth away. The sight confused her. A counter-demonstration? Then she found herself pushed and jostled, caught in a bow-wave of humanity as the boys pushed their way to the outside with the bare poles.