Bring back the Borgias!

Harding smiled, a grim and somehow impressive smile. Speaking almost for the first time, he said:

‘All Catholics are deceitful and treacherous and avaricious, but Catholic priests are the baneful, malignant fruit of that tortuous, evil tree.’

Harding said: ‘Yes, I am a Catholic. It is difficult to explain.’

They waited expectantly, but Harding gave no sign of making the explanation. He relapsed into staring meditation.

Harding still gazed over their heads into the relaxed and languid dusk. Michael thought: ah, an 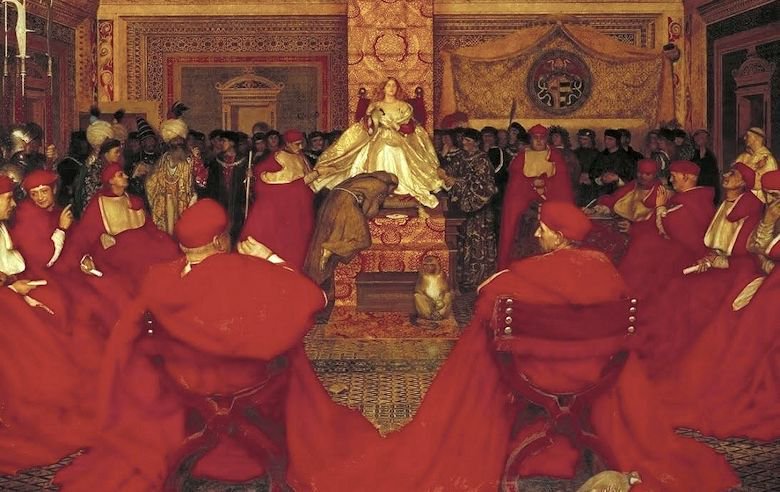 author! Why were authors always so shadily unpleasant? Unhealthy, and dressed with that shabby flamboyance. The life, perhaps … a drab tampering with and parading of words. How wretched.

Recovering himself, Paolini broke the silence.

‘Priests are like carrion crows, like vultures. They kill the countries in which they live to practise their necrophagous rites. If they could they would bring back the reign of the Borgias …’

Harding said: ‘Why not?’

Van Bein looked up, smugly uneasy. Even their age and nobility could not justify the Borgias. He said:

‘Why, they were murderers, Mr Harding. Poisoners every one of them. And more than that, they were downright immoral. I read that they even committed’ – he looked round uncertainly – ‘… incest!’

Harding glanced at him indifferently, his blue eyes impersonal under the close-cropped head.

‘Since Creation,’ he said, ‘there has been only one man wholly good, and none wholly bad. Who are we to condemn the Borgias, who had the courage to commit where others only wish and do not act? They lived.’