He heard John’s voice, muffled: ‘Push off, Paddy,’ and Patrick’s more boisterous cry: ‘Heave ho, me hearties!’ There was the scrape of wood, and the voices diminishing. He waited for a couple of minutes, his eyes on the empty fields and the cows, and then went across and looked out of the other window. The Charmian was pulling away steadily towards the island. 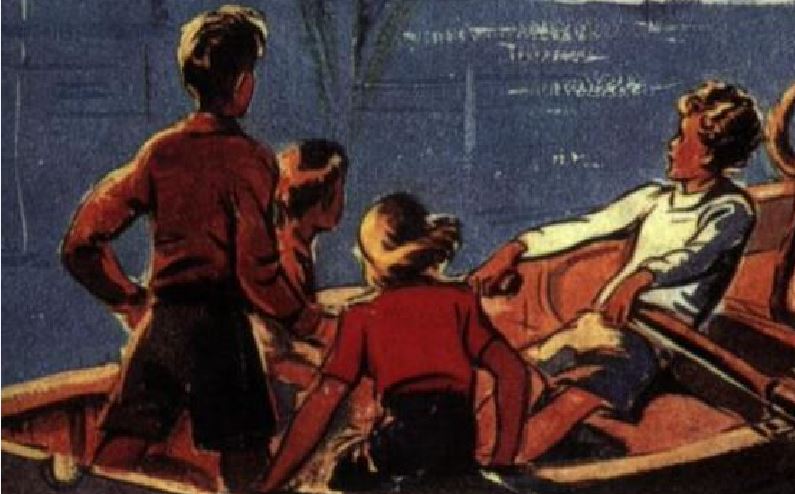 He was the unwanted, the outsider. The feelings with which he watched the small boat and its crew of four growing smaller on the placid waters of the lake were beyond his conscious gauging. He could not even be sure whether he thought that he had been cheated over the drawing of the lots, or not. There was no way in which he could imagine the cheating to have been carried out, but it was as hard to believe that fate also was against him, conspiring to exclude. He would be on the next trip; but an island is only discovered once. With an effort, he left that window and returned to his look-out post.

When he looked again, they were disappearing behind the island; John, he realized, would be taking the precaution of beaching the Charmian in that position where she would be least likely to be seen. His imagination was with them. They – who had been living here no longer than a few weeks – would be climbing out of the boat on to the island, his island. His fists clenched of their own accord, until his finger-nails were hurting his palms.

He alternated between the look-out post and the window on to the lake. He saw their figures appear on this side of the island, and one of the girls waved towards the pavilion. It was true, as Patricia was to point out so many years later, that even then he was, in many ways, grown up. His feelings were as bitter as they would ever be, bitter with a calmness that is generally beyond the reach of a child. An ordinary child would have been incapable of concealing the bitterness he felt; and yet here, by himself, unwatched, Frank still gave no outward sign.