I need you down here!

Thorsen continued to stare into the crevasse. Nadya called up:

‘It is still sinking.’

‘We must lose no time,’ Mouritzen said. ‘I will go first. You come after me, by the same route.’

He eased himself backwards over the edge and felt for footholds as he made his way down. The slope was steeper than he had expected and twice he had to stop and change direction. The second time, he called to Thorsen: 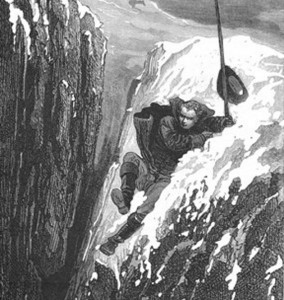 ‘You can start coming now.’

Thorsen stood there, unmoving. He did not reply. Perhaps he was scared of heights, Mouritzen thought. It might be possible to get Nadya and pull her clear without him, anyway.

The ledge was about three feet wide and had an irregular downward slope. Mouritzen knelt and tried to reach down to Nadya, but there were several inches between their stretching fingers. He would have to lie on the ledge and reach down; but for that he would need Thorsen with him as an anchor.

He called, sharply, urgently: ‘Jorgen! I need you down here. You will not find it difficult.’

Thorsen said: ‘It is strange how one finds a pleasure by accident.’