Jane had been there before – or rather, Cynthia. In John Christopher’s The Caves of Night, after a caving accident, she finds herself clinging on to the edge of an abyss, with the weight of two men dragging her down. One is Henry, her husband. The other Albrecht, her lover. 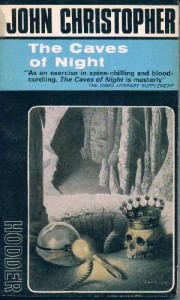 Henry said: ‘Sinner.’ His voice sounded almost normal; the fall could not have hurt him. ‘There’s only one thing for it. Can you reach that knife I gave you?’

It was painful to speak; each word had to be forced out. The arc of compression twisted her body downwards. Second by second her feeling of helplessness increased.

She got her hand back awkwardly towards the pocket, and forced it in. Her fingers touched the end of the knife, and at last pulled it clear. Getting it out, she almost dropped it.

The men had been watching her from their see-saw of rope. Henry said:

‘We’re going to fall anyway. The only thing you can do is save yourself. You must do that. Cut the ropes.’

‘Sinner, you will have to do it in the end. The longer you leave it, the worse it is for us.’

She said: ‘What point is there in freeing myself? The lamp’s out of reach. I have a candle, but you and Albrecht have the means of lighting it. I shall be left here in the dark, by myself.’

‘The lamp will throw up enough light for you to see your way up the slope, I think. After that – you never know what may happen. At least, it’s better than this.’

She struggled for breath. ‘And I’m to murder you and Albrecht, first?’

‘If you don’t, do you know what’s going to happen? You will black out after a time. We shall be left hanging here.’

For the first time since the fall, Albrecht spoke. His voice sounded dazed, almost disbelieving ‘I am not sure, but I think perhaps two could be saved.’

‘If you cut one of the ropes, there will be only half of the weight on you, Cynthia. It is possible that you might be able to lift the other – enough so that he may get a foothold, and climb.’

A silence followed. There was only the noise of plunging water.