No link but memory

He ran back to Mummy and Gordon, who were getting ready to leave. As they all came out of the Blue Room he saw the car door was open, and the boy was bending inside. Gordon shouted loudly at him and he looked round, frightened, before running off down the garden path, clutching something in his arms. Gordon ran ahead to the car.

‘Can’t see anything missing,’ he said.

‘Has the young child of Evil taken something of yours?’ she asked, anxiously. ‘I’ll have the hide from him if he has.’

Mrs Hallam said: ‘It’s all right. Only a bunch of seaweed that would have been thrown away.’

‘I’ll have the hide off him anyway,’ the woman said, ‘for poking his nose into people’s property. Andrew!’

She hurled herself away down the garden path in pursuit of her son. Mrs Hallam got in the car.

‘Let’s go before she comes back, Gordon,’ she s 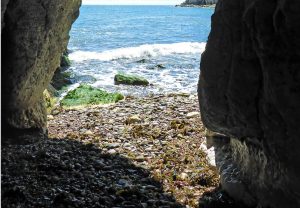 Lance climbed in beside Gordon. He realised it would be fruitless to ask anybody to help him recover the seaweed. Even if they were to admit its value they would probably declare it was better to leave it with the boy, who had had no fortnight at the sea. There was nothing to do but hug his loss dumbly. Now there was no link to bind him to the crab pools, and the little girl, and the mysterious cave. No link but memory, and already that was fading.