The weather is breaking

She felt more at peace than she could ever remember. Over eighteen hours had passed since she last took the drug, and her mind felt clear, though languid. There was the enormous relief of freedom, the joy of being clean and properly fed. She reminded herself that the freedom was conditional still – that the Jelains would be hunting for her and on the island had the power to apprehend her. But even that reflection did not trouble her much.

They were silent for some time. She felt no need of talking, but still was glad when he spoke. He pointed to the small rock-lined bay beneath them. 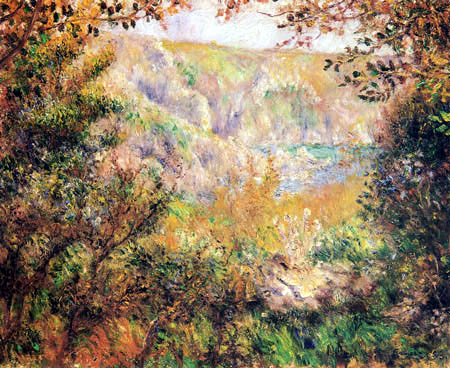 ‘Do you see those fishing boats?’ There were three, moving slightly on blue water scored with gold. ‘The one lying furthest is Tostevin’s, which will take us to Jersey.’

She spoke lazily, not critically nor in alarm. Peter d’Aurigny said:

‘I warned you there would be no luxury in the voyage.’ She shook her head, smiling. ‘In fact, it is likely to be unpleasant. The sea looks calm enough now, but Tostevin declares the weather is breaking.’

‘I shall not mind if it is rough.’

He looked at her. ‘I know: you have been on a pleasure steamer from Yarmouth to Lowestoft, with an east wind blowing.’

She laughed. ‘It was from Margate to Brighton, which is much further.’